In The Favela, Hunger Is Back

In the Favela, Hunger is Back 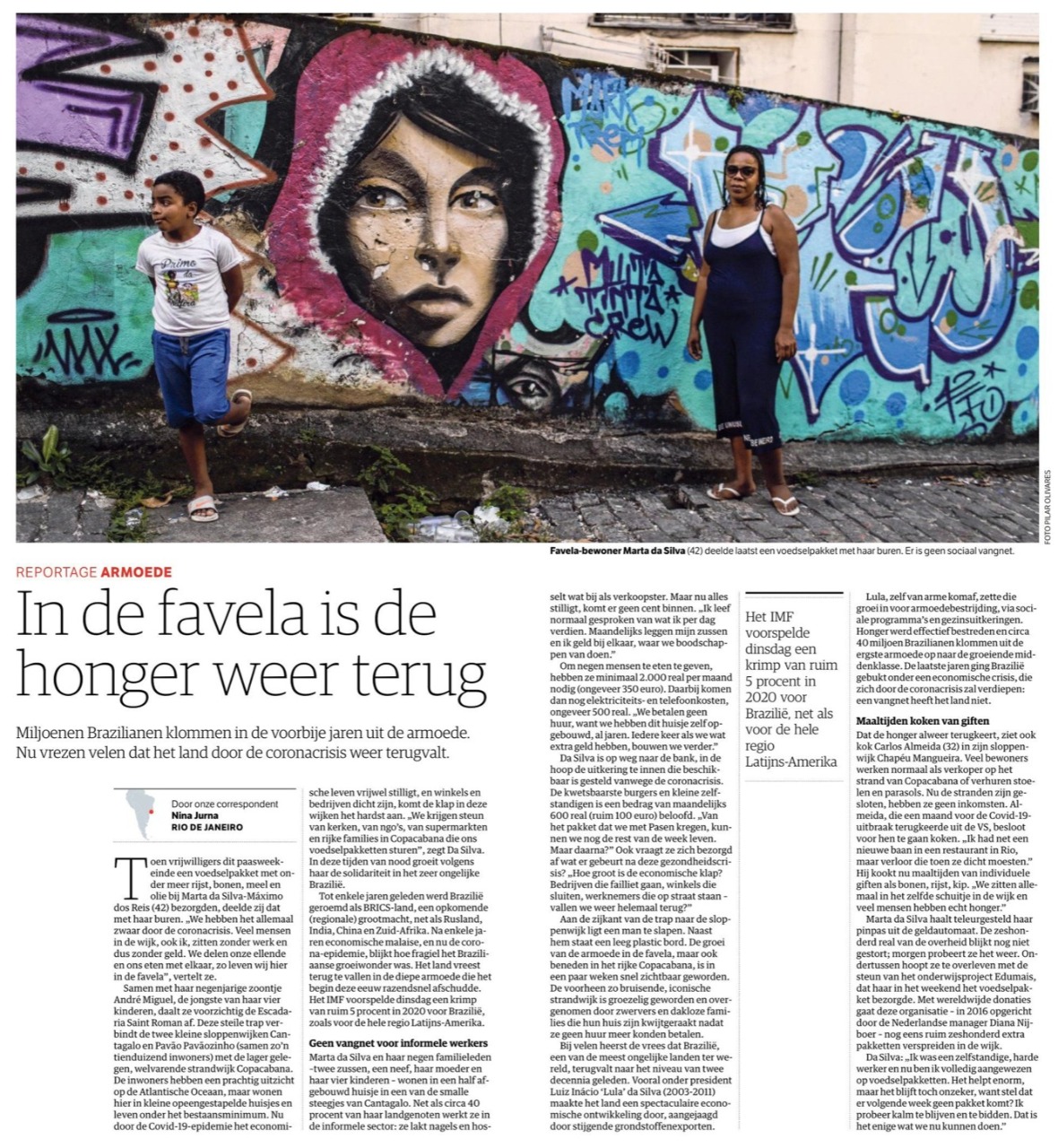 Millions of Brazilians got out of poverty in the last years. Now many fear that the country will relapse due to the corona crisis.

(Article originally written in Dutch by Nina Jurna and published in the NRC Handelsblad: https://www.nrc.nl/nieuws/2020/04/14/in-de-favela-is-de-honger-weer-terug-a3996758)

When volunteers delivered a food package including rice, beans, flour, and oil to Marta da Silva-Máxima dos Reis this Easter weekend, she shared it with her neighbors. “We all have a hard time because of the corona crisis. Many people in the district, including me, have no work and are therefore without any money. We share our misery and our food with each other, this is how we live here in the favela”, she says.

Together with her nine-year-old son André Miguel, the youngest of her four children, she carefully descends the Escadaria Saint Roman. This steep staircase connects the two small favelas of Cantagalo and Pavão Pavãozinho to the lower, affluent beach district of Copacabana. The inhabitants have a beautiful view of the Atlantic Ocean, but live here in small stacked houses and live below the subsistence level.

Now that the Covid-19 epidemic has brought economic life to a near halt, and shops and businesses are closed, the blow hits hardest in these neighborhoods. “We receive support from churches, NGOs, supermarkets, and wealthy families in Copacabana who send us food packages,” Da Silva says. In these times of need, she says, solidarity has grown in very unequal Brazil.

Until a few years ago, Brazil was praised as a BRICS country, an emerging superpower, just like Russia, India, China, and South Africa. After several years of economic downturn, and now the corona epidemic, it shows how fragile the Brazilian wonder of growth was. The country threatens to relapse into the deep poverty that it shook off at the beginning of this century. On Tuesday, the IMF predicted a contraction of more than 5 percent in 2020 for Brazil, as it did for the entire Latin America region.

No safety net for informal workers

Marta da Silva and her nine family members live in a half-finished house in one of the narrow alleys of Cantagalo. Like about 40 percent of her fellow Brazilians, she works in the informal sector: She paints nails and makes extra money as a saleswoman. But now that everything is shut down, she doesn’t make any money. “I normally live on what I earn each day. Every month my sisters and I put money together, which we use for shopping.”

To feed nine people, they need at least 2.000 reais per month (about 350 euros). In addition, electricity and telephone costs are added, which are about 500 reais. “We don’t pay rent, because we’ve continued building this house ourselves over the years. Every time we have some extra money, we build on.”

Da Silva is on her way to the bank, hoping to collect the benefit made available due to the corona crisis. Vulnerable citizens and small self-employed persons have been promised an amount of 600 reais (more than 100 euros) every month. “We can live from the package we received at Easter for the rest of the week. But after that?” She also worries about what will happen after this health crisis: “How big is the economic blow? Businesses that go bankrupt, shops that close, employees who are on the street – do we fall back completely?”

A man is sleeping on the side of the stairs to the favela. Next to him is an empty plastic plate. The growth of poverty in the favela, but also down in the rich Copacabana, has quickly become visible in a few weeks. The previously bustling iconic beach district has become dingy and taken over by drifters and homeless families who lost their homes after they were unable to afford rent. Many fear that Brazil, one of the most unequal countries in the world, will fall back to the level of two decades ago.

Especially under President Luiz Inácio ‘Lula” da Silva (2003-2011), the country experienced spectacular economic development, boosted by rising raw material exports. Lula, from a poor background himself, used that growth to fight poverty through social programs and family benefits. Hunger was effectively combated and approximately 40 million Brazilians rose from the worst poverty to the growing middle class. In recent years, Brazil has been burdened by an economic crisis, which will deepen due to the corona crisis: the country has no safety net.

Chef Charles Almeida (32) also sees that hunger is returning in his favela Chapéu Mangueira. Many residents normally work as a seller on Copacabana beach or rent chairs and umbrellas. Now that the beaches are closed, they have no income. Almeida, who returned from the US a month before the Covid-19 outbreak, decided to cook for them. “I just got a new job at a restaurant in Rio, but lost it when they had to close.” He now cooks meals from individual gifts like beans, rice, and chicken. “We are all in this together in the neighborhood and many people are really hungry.”

Disappointed, Marta da Silva takes her debit card from the ATV. The 600 reais have not yet been paid; she’ll try again tomorrow. Meanwhile, she hopes to survive with the support of the EduMais education project, which provided her with the food package over the weekend.

With worldwide donations, this organization – founded in 2016 by the Dutch manager Diana Nijboer – will distribute more than 600 additional packages in the district. Da Silva: “I was a self-employed, hard worker and now I’m completely dependent on food packages. It helps a lot, but it remains uncertain, because what if there is no package next week? I try to keep calm and pray. That’s all we can do now.”