"a Life Of Two Halves"

“A life of two halves”: A profile of William, the lead volunteer on Edumais’s soccer program 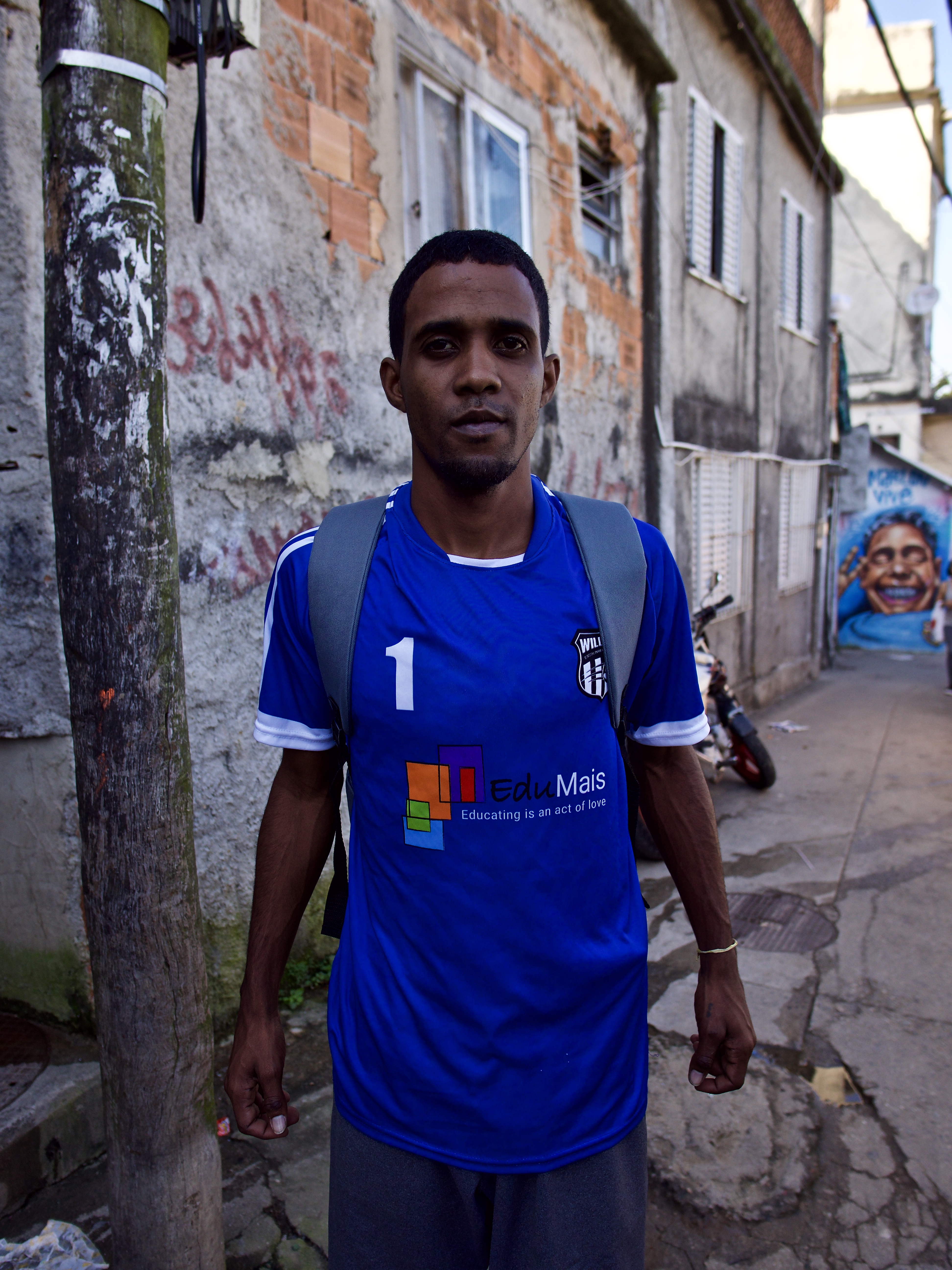 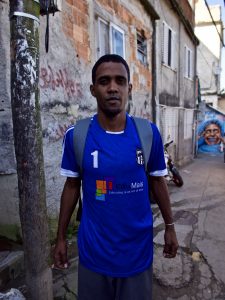 illiam’s reflections on his adolescence are tinged with an almost overwhelming sense of what might have been. Born and raised in Cantagalo, one of the favelas in Rio de Janeiro where EduMais works, his talents once caught the eye of some of Brazil’s most famous football clubs, such as Fluminense and Grêmio. This potential was to suffer, however, from a severe lack of guidance.

“My parents fought a lot, you know,” William tells me, “I didn’t have anyone by my side to show me the right way . . . I made the wrong decisions.”

Faced with this vacuum of support, in a story unfortunately all too familiar among Rio’s impoverished youth, William fell into the drug trade. Although we do not dwell on too many details, William swiftly paints a picture of a life in which he felt “preso” – trapped, imprisoned. Youthful promise soon gave way to the violence of trafficking and the frequent loss of life – “a brother, a cousin, so many friends” – that comes with it.

Counting himself lucky to eventually get out, William relates how an everyday scene in the streets of the community became a transformative moment for him. Returning to Cantagalo after living for several years in Tabajara – a nearby favela where William’s wife, with whom he has two sons, is from – William says that he “saw some children playing, you know, like this [making a gun shape with his hand], and I thought: things can’t be like this. I don’t want this.”

Filled with a renewed sense of purpose, William sought to find a way to “tirar o foco das crianças das armas” – to take the children’s focus away from guns. So began his “escolinha de futebol,” his little football school, launched at public gatherings in the community for Children’s Day, which falls on 12th October in Brazil, in 2017. Already serving 105 children at the time of writing, William has quickly become the figure he now recognises he lacked: a role model, a guide. 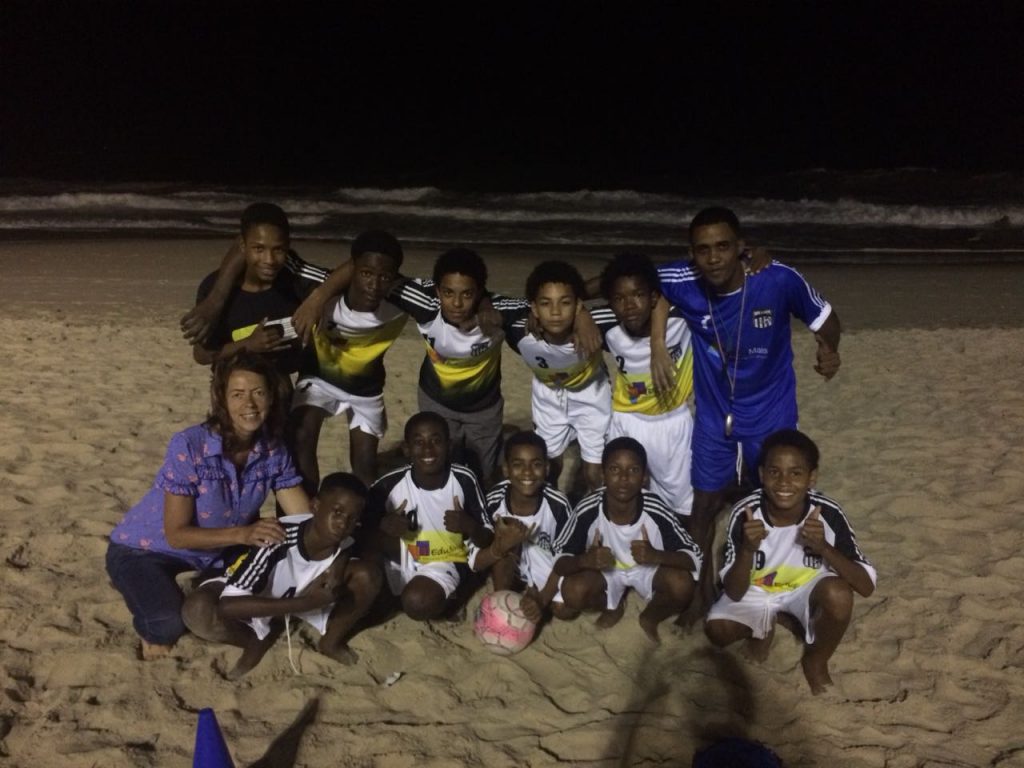 William FC training on the beach

Working with three different groups – 4-7, 8-10, and 11-13 year-olds – William provides each age-group with the opportunity to play football for two hours, three times a week, while also running different activities such as physical training on the beach. Though he occasionally receives assistance, there are times where William is in sole charge of upwards of 40 children – or, as he puts it, “sometimes it’s just me and God.”

It doesn’t take long to realise how important William’s faith is to him, nor how seriously he takes the schooling part of his escolinha de futebol. He repeatedly refers to the sessions the children have with him as “aulas”: lessons, classes. The time he spends with the children is not simply about playing football, he explains, but also teaching them how to behave towards each other.

Fighting and swearing are two particular issues William faced, especially with the elder age-group. Yet once the children realised that fighting would mean going home and missing the next session, and that swearing would lead to an automatic penalty kick for the other team, their desire to play football – and to win while doing so – has seen their behaviour dramatically improve. “At the start it was difficult,” William says, “but now they have more respect for each other.” 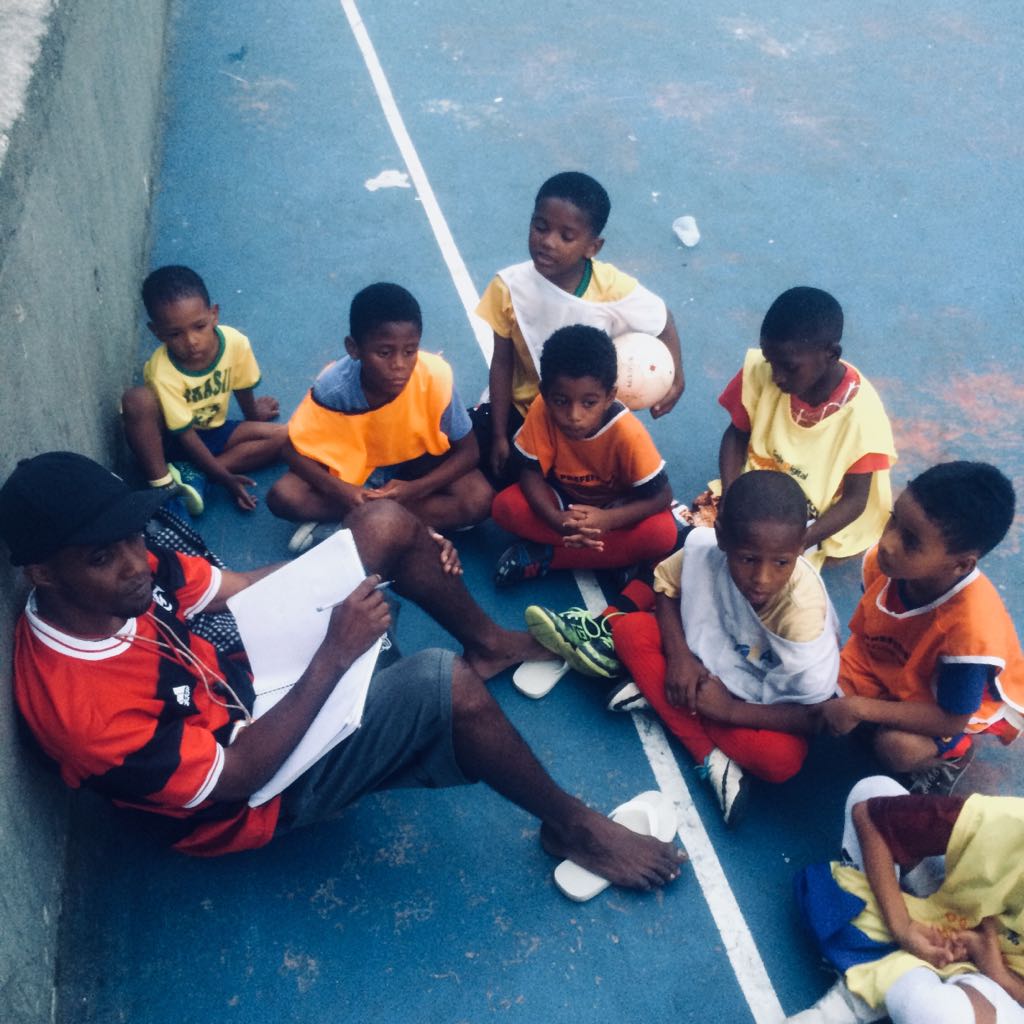 Although William’s gift for condensing complex processes into simple statements can make what he does sound ridiculously easy, his remarkable way with the children is beginning to verge on the folkloric within the community. Even during my interview to join EduMais, Diana, the organization’s founder, was waxing lyrical about his uncanny ability to get the children to do what he wants them to do, like waiting for their turn patiently on the sidelines.

Parents are turning to him, too. One mother, for example, came to him worrying that her son wasn’t eating the food he should be. “Just tell him that when he eats his vegetables he can join us at training again,” William said. Sure enough, just like that, clean plates ever since.

Listening to William, absorbing his captivating humility, I try to put my finger on something concrete to explain the gentle yet commanding power he holds. Perhaps it’s the infectious energy he emanates: he’s usually up at 5.30am and goes running on Ipanema beach at 7am; football training sometimes doesn’t finish until 10pm. 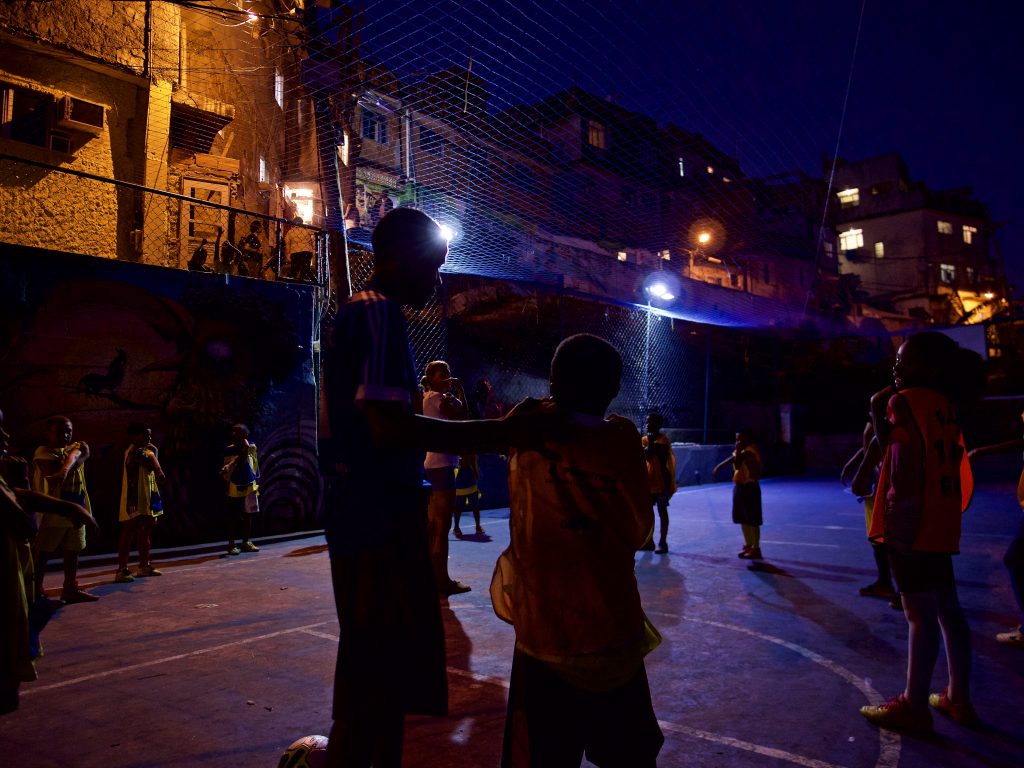 Training late into the night

Perhaps it’s the unspoken authority that comes with a voice that has been through the life he has, infused with a determination that no one else should have to. “Preciso tirar um peso da minha cabeça, entendeu,” William says at one point. I should probably translate this as “I need to get a load off my mind, you know,” to make it a recognizable English idiom. But there’s something about a literal translation that I kind of like: “I need to take a weight out of my head.”

Perhaps it’s the way William seeks to lead by example, even away from the football pitch. The kids sometimes see him at school, he tells me, whether that’s to check that they are studying or when he’s voluntarily sweeping up outside. He does the latter in the hope the children will think that if he’s doing it, they ought to as well; he wants to ingrain in them the value of selfless contribution so they help their parents out with the chores at home. William’s face gleams with pride as he informs me how his 6-year-old son now takes the rubbish out, without having to be asked.

And perhaps, too, it’s the sense of inclusion that William fosters. Everyone is welcome and though the majority of the kids that have football lessons with him come from Cantagalo, word is getting out to the adjacent community of Pavão-Pavãozinho, and even a few street children have begun to join. William also organizes games and tournaments with teams from other communities. As well as being fun for the children, this development of relations between communities, in a city where neighbouring favelas can be in the hands of rival drug gangs, is invaluable. 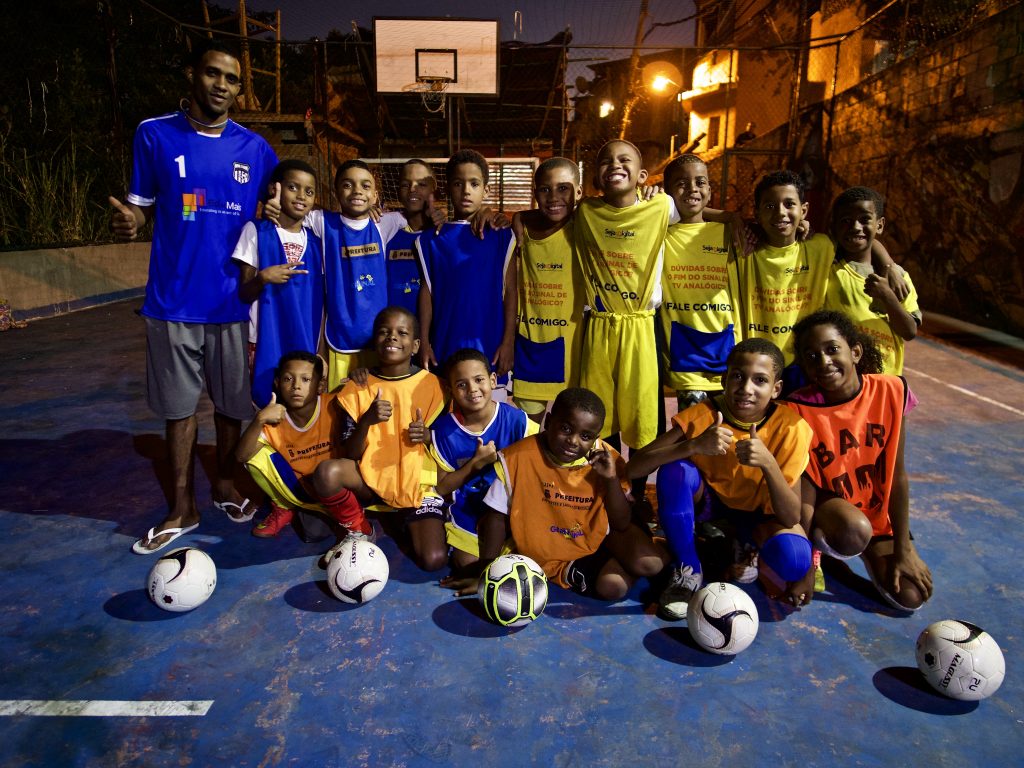 Some of William’s students

Unfortunately, William’s desire to not leave anyone behind, to take the children’s focus away from guns, endured a tragic blow earlier this year. Visibly affected, William relates how one Saturday, a few months back, a 10-year-old boy in the community lost his life when an adolescent’s gun accidentally went off. “He could have been training with me,” William laments, “chamei todo mundo” – I invited everyone.

Setbacks have come not only from the destructive consequences of the prevalence of guns but that other crippling mainstay of Brazilian life: corruption. One association wanted to charge the children to get the pitch refurbished and with a gesture towards his shorts William makes it abundantly clear where he believes that money would have ended up: their pockets.

In another incident, someone William knows in the community collected a donation of footballs and shirts for the children. Only five of the eleven footballs donated made their way to the kids – William later found out that the person who collected the donation kept six balls for himself – and not a single one of the shirts.

“Isso é errado!” he says emphatically. This is wrong. “We cannot take from the children, we have to give. We have to give!”

Since partnering with EduMais a few months ago, William feels like he is now working with people he can trust – “we’re on the same team,” he says of Diana and Bruno of Solar Meninos de Luz – giving him the chance to focus his energies on his football program and its participants. 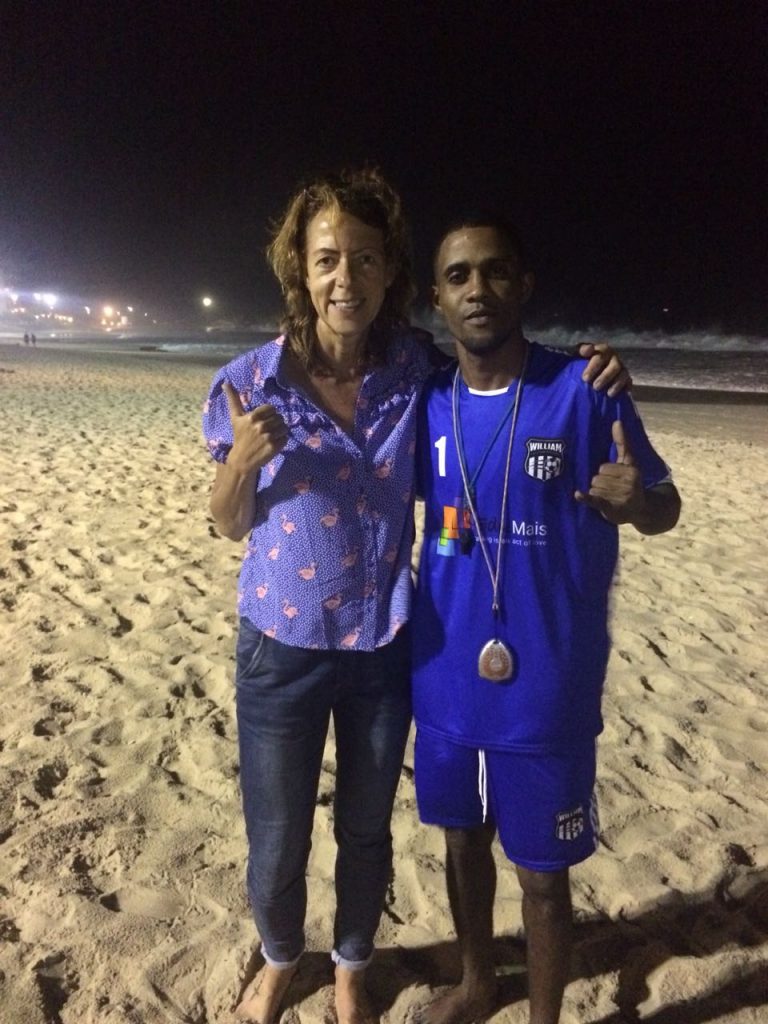 And the success stories of his escolinha de futebol are already coming in. One student has gone on to train with Botafogo, another with Flamengo, two of Rio’s top football sides. One child could barely kick a ball when he joined but now, William laughs, he can control the ball on his chest and volley at goal. Another has never missed a single session: “I gave him some shin pads. He deserves it.”

With these successes, William takes solace in the fact that he is now on the “caminho certo” – the right path – with hope his overriding sentiment. Although he can’t quite extend this sense of hope to Brazil’s chances in the World Cup – “I’m not confident, not after last time,” he says, before tipping France or Belgium as the winners – he nevertheless feels like things are getting better in Brazil as a whole. On a personal level, too, he dreams of having a “casinha,” or little house, for his family in the community one day, while making it clear that for all he gives to the children, he also receives so much energy and motivation from them: “eles me animam, eles”.

The past and its scars will, of course, never fully stop bearing down upon him. “Sometimes I’m just sitting there in bed and suddenly all these things come rushing back from when I was young,” William says at one point, his face touchingly innocent, “and I think about what I could have done differently with my life. All that potential. . . .”

As his voice trails off, I get a brief glimpse of that unguided adolescent. “Maybe there’s a positive side to that as well,” I find myself saying. William looks up at me, confused, as I begin to fear I may be speaking out of turn. “But, from what you’ve said, it is the weight of those memories, as well as the children, that gives you the motivation to carry on, that means you will never stop.”

“Yes, you’re right,” he says, his face breaking out into a relieved smile, his voice filling again with resolve, “sou vencedor.” I’m a winner. 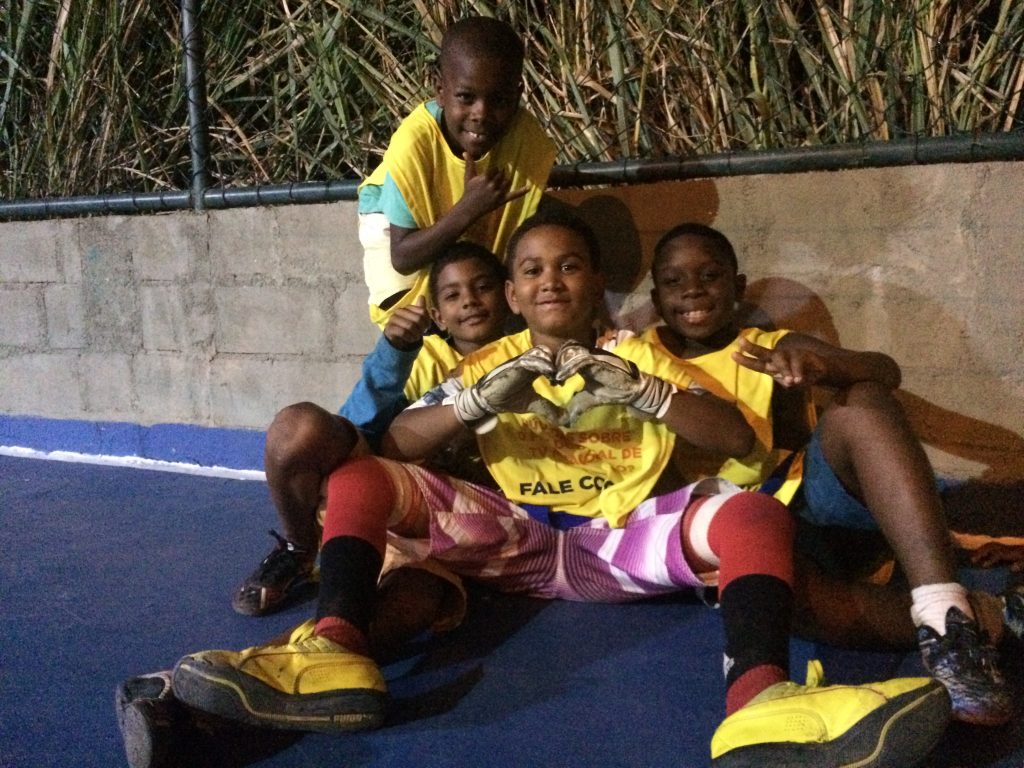