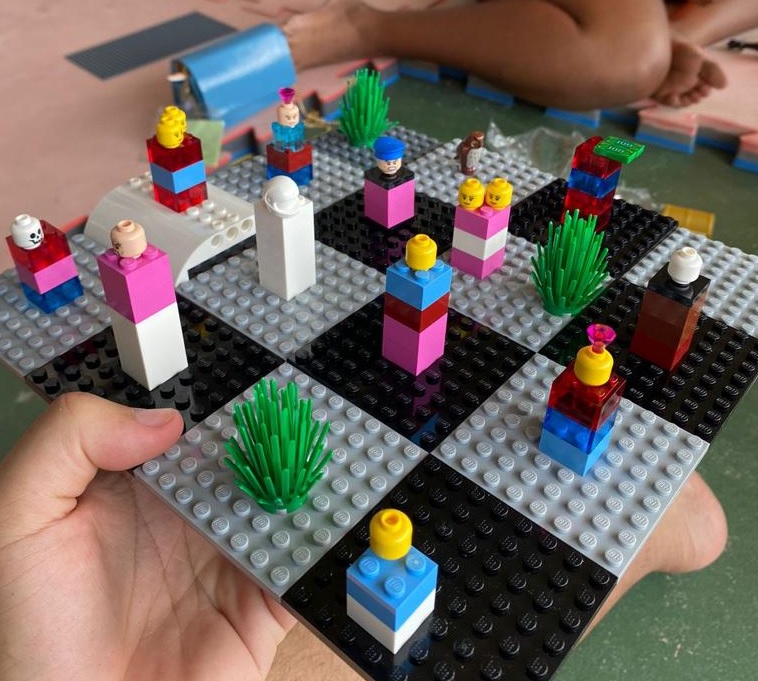 What a drive, what a thrill and what an energy the EduMais Summer Camp students have! Today was about three things:

We started the day with a classic one – yes a classic one: the Spaghetti – Marshmallow Challenge. A challenge where you have to build the tallest freestanding structure with 20 spaghetti’s, 1 meter of rope, 1 meter of tape and a Marshmallow. It is a workshop that demonstrates that every game design project has assumptions and that making games is actually teamwork. And that failing actually is an option. 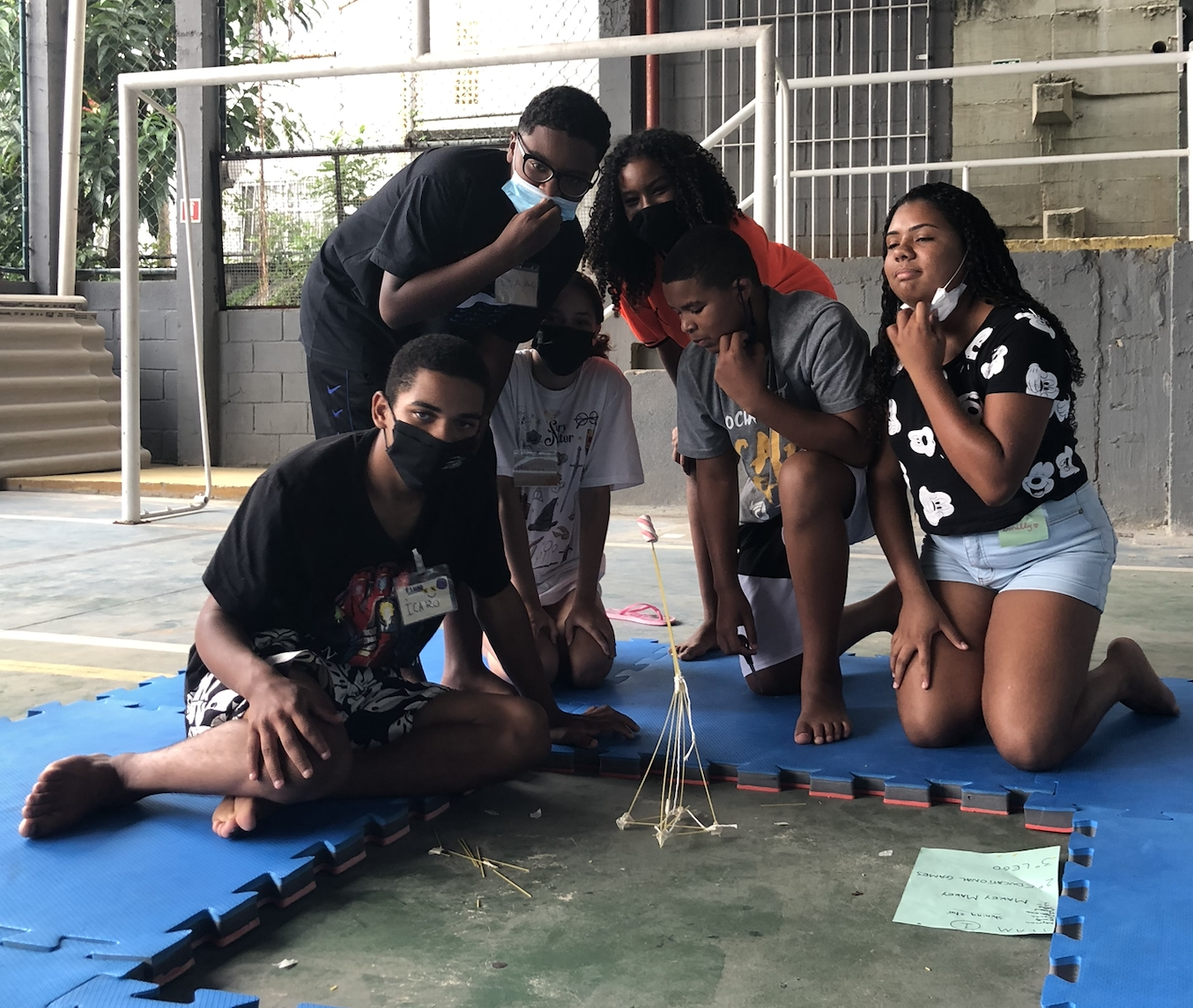 After the Spagetti Marshmallow workshop we dove into 5 making workshops.

Workshop 1 was Lego. In gaming terms, Lego is a sandbox play – or often called not a game at all. We challenged the students to create classic chess with Lego. 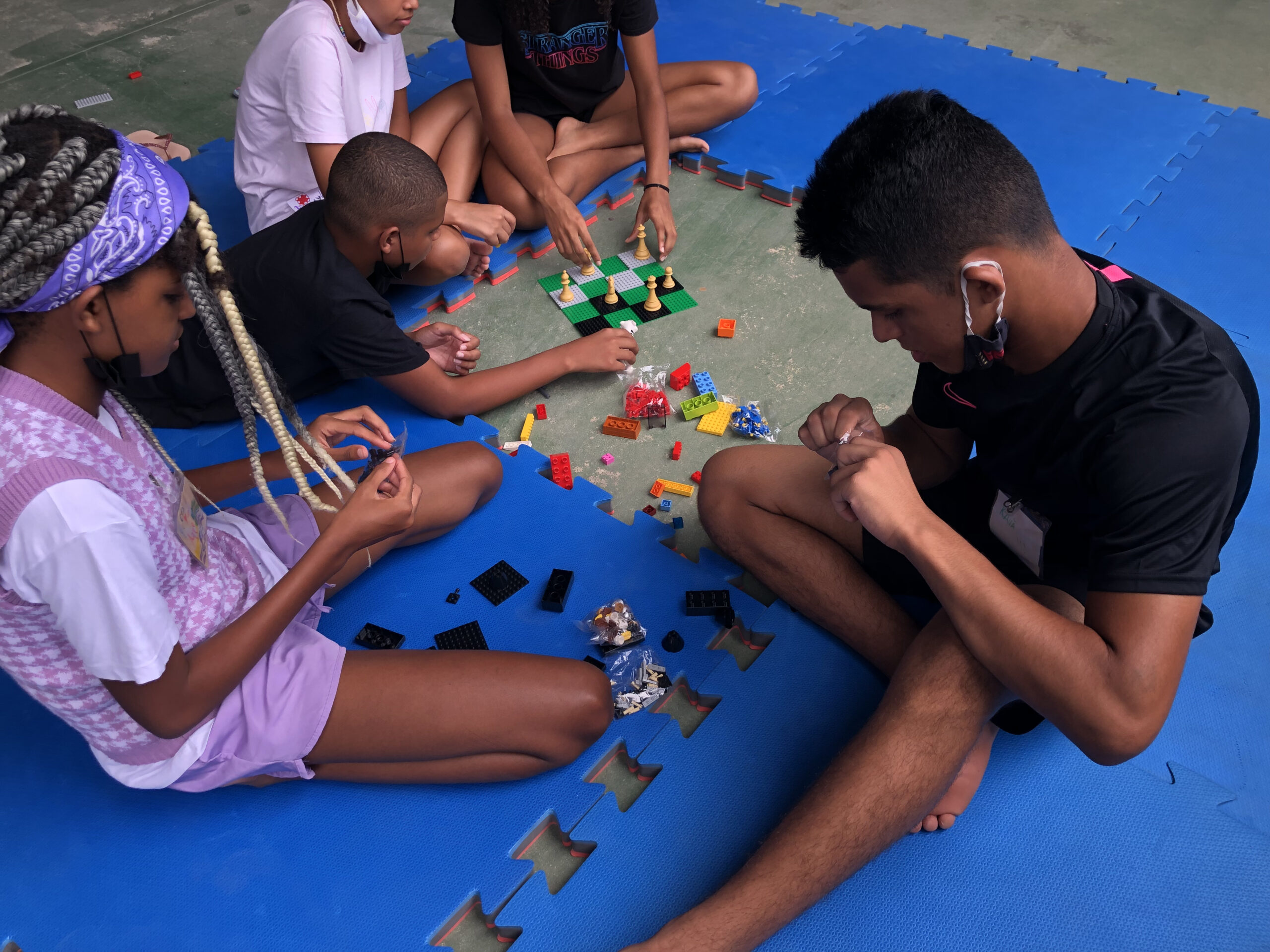 Workshop 2 was MakeyMakey. A build-your-own-controller kit that transforms a Banana or sheet of aluminum into a game controller by using objects as sensor for play. 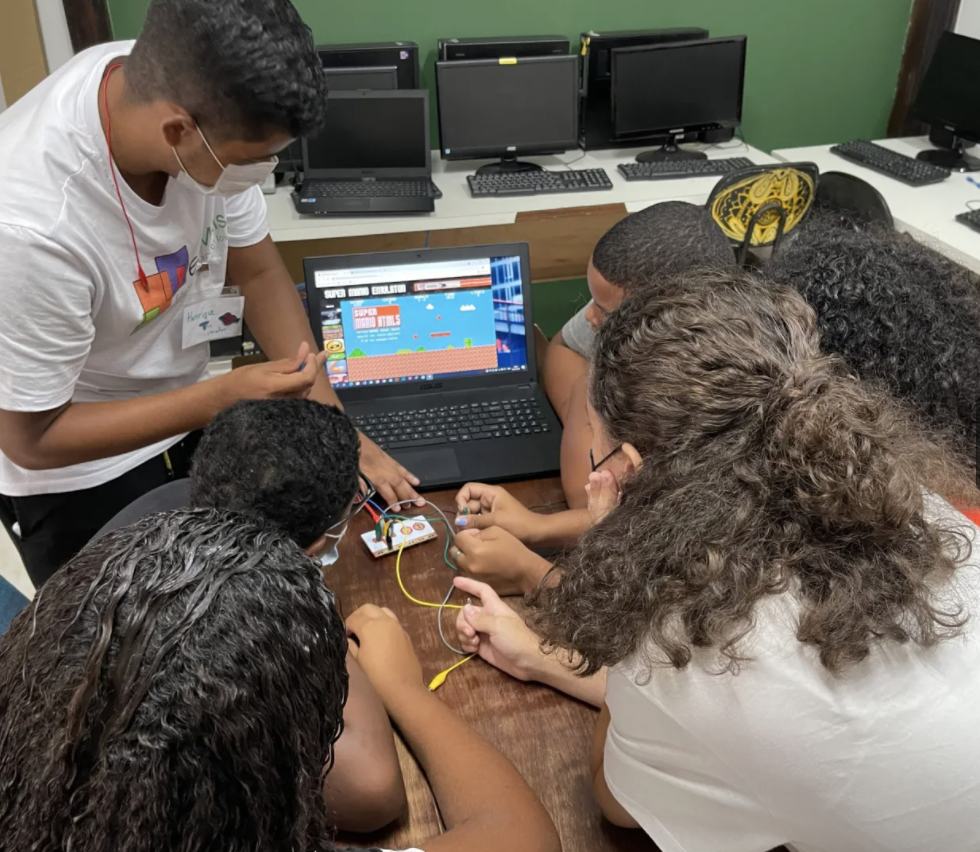 Workshop 3 was about the art of art. Visualizing objects and interactions to play with requires the skill to be able to visualize with drawings and pictures instead of using words. Simple objects are often quite difficult to visualize. With some powerful techniques it is possible to learn how to visualize these objects simplified. 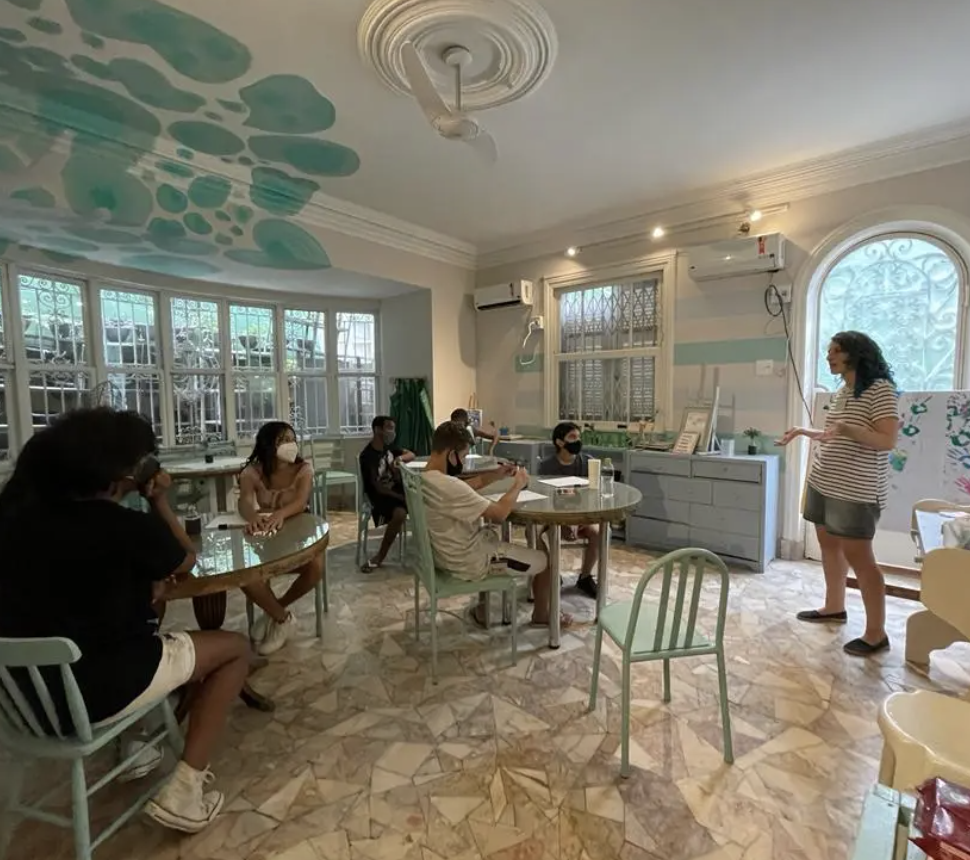 This video shows Flavia, a Brazilian designer and researcher who voluntarily contributes to the course, how to design with the 3 basic objects: a circle, a rectangular and triangle.

Workshop 4 were the LittleBits. Probably one of the most favorite workshops for the EduMais students. LittleBits are magnetic objects that click together. And if they are assembled in the right way it forms a operational circuit board. Hardware as if it was software basically.

I love this video, taken by Sandra van Rijswijk, of one of the students explaining to the teacher how the LittleBits work.

Workshop 5 was about playing existing educational games and to reflect on that. They loved and hate them. That’s on purpose. Because creating games will not only generate fans but at the same time will create haters. To be able to cope with the emotions of everybody with an opinion is an important aspect of creating a healthy game-community. And often its better to listen to your opponents for suggestions to improve your game than to listen only to your fans! 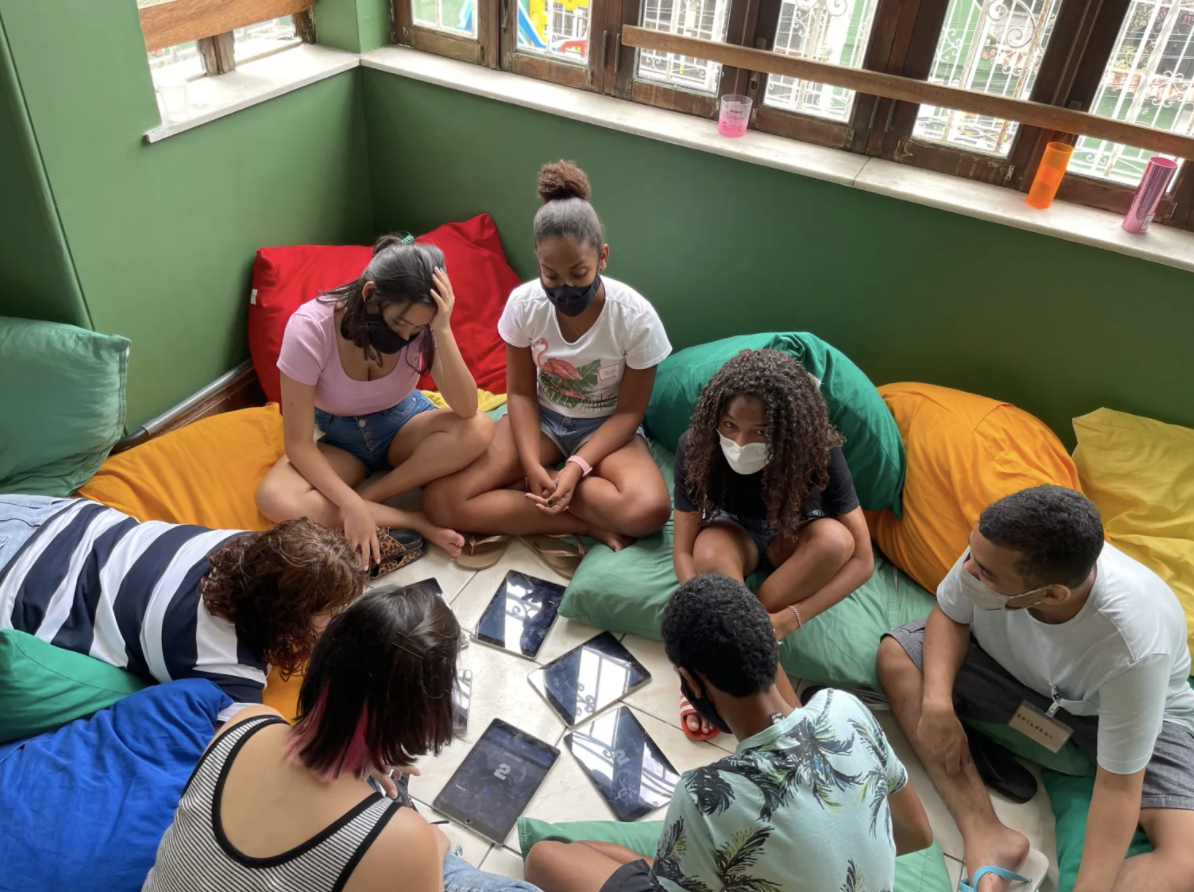 Educational Games: fun or not?

We ended the day with a second round of the Marshmallow challenge. And we asked the students what they have learned today, what they liked and what they would like to see improve. Collectively summarized and presented to the entire group we are looking back to a fruitful day and ready for the day to come: making game concepts! 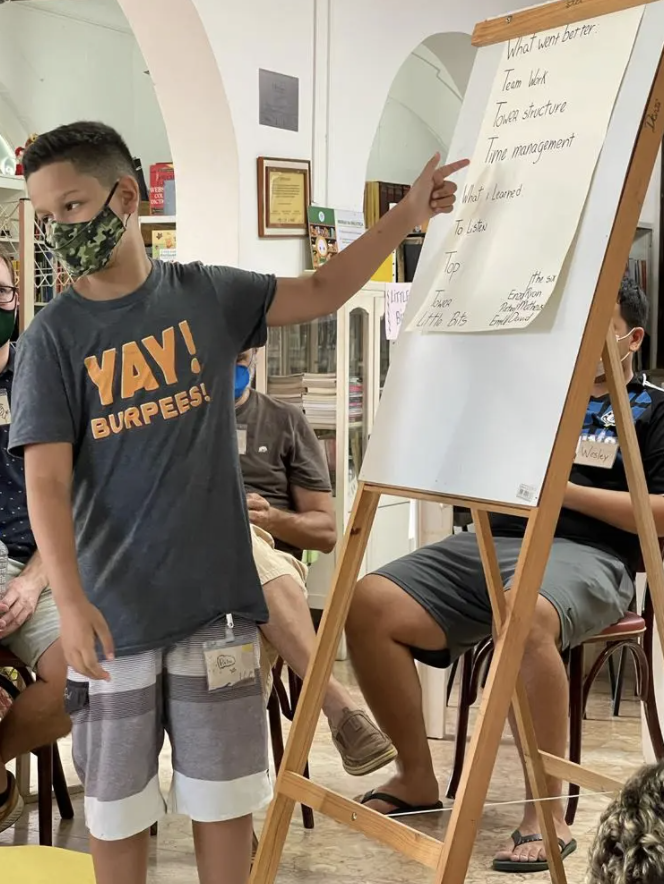 Although the surroundings of the Favela often feel to be not very attractive as an outsider. The beauty of these students willing to learn and to move forward during their free time summer holidays deserves a great respect. And quite often even nature signs that Favelas are beautiful! 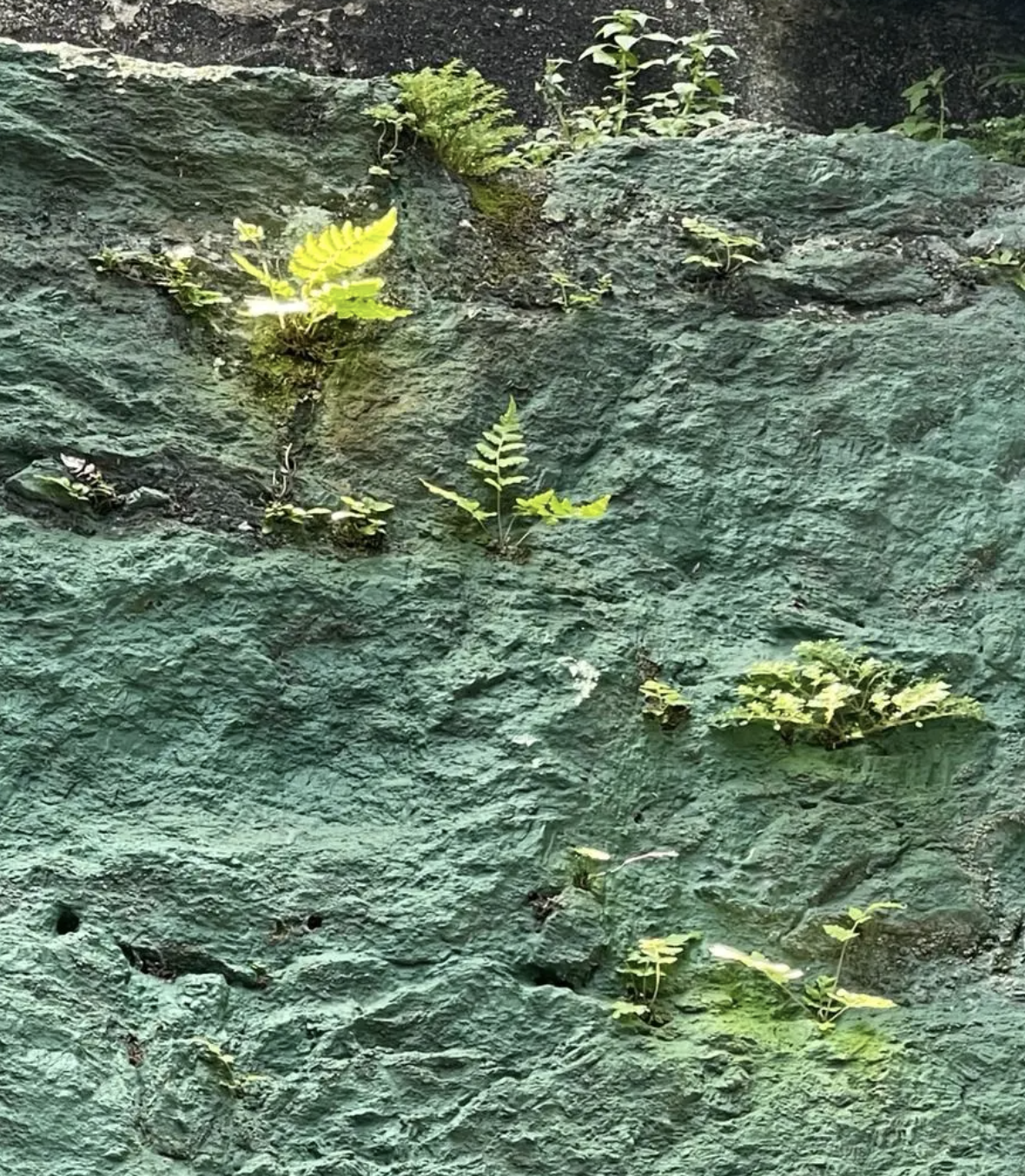 The sun set some beams of light on wall mounted ferns at Escola Solar walls.