The Reality Of Favela Life For Edumais' Children

The Reality of Favela Life for EduMais’s Children 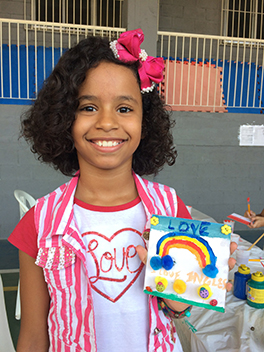 They say a picture is worth a thousand words. But this can still leave many things unsaid.

At EduMais, most of the images we share publicly project ideas that are important to us: positivity, happiness, hope, resilience.

Though the children and teenagers we work with grow up in difficult circumstances, their smiles shine through in their photos. They are not subjects of our pity; they are too strong for that. Their eyes, their personalities, gaze back at us, a hopeful future captured in a gleaming smile.

But, as they also say, looks can be deceiving. The happiness seen in so many of the children’s photos, though real, can obscure the difficulties they face. Sometimes, we need to look beyond the image presented to us to understand what’s actually going on. 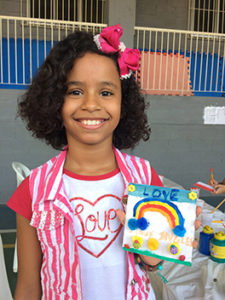 This poses a certain difficulty for us.

As a matter of ethics, we do not share imagery of the children’s living conditions or, at times, challenging classroom behavior.

And, as noted elsewhere on our site, the imagery of favelas is already negative enough. Poverty and other issues are problems our children face, certainly, but they deserve more than to be defined by these issues alone. Favelas are sites of joy, creativity, talent, and strength, as much as they are of violence, drugs, and socio-economic disadvantage.

In choosing to focus our stories on the more positive side of life in the favelas, however, we inadvertently allow space for skepticism to emerge.

The kids look happy, open, welcoming, and generally well-fed. So much so you may begin to ask: Just how bad can it be? Do they even need my help?

It’s important not to underestimate the children’s problems because they smile, even more so for those of us privileged to work with them. Their ability to connect easily, to be so open and engaging, can throw us off guard.

Their happiness is disarming. Beautiful, but disarming.

For those of us fortunate to grow up in more privileged circumstances, it can be hard to imagine being happy in the children’s position. Almost all households in the favelas deal with poverty, on varying scales, on a daily basis.

Complicating the situation for 70% of households are severe domestic problems. These range from drug and/or alcohol addiction, drug dealing, and domestic violence to absent, dead, or imprisoned fathers, sometimes mothers too. Some of our kids are trying to make their way in this world while both their parents are in jail.

Then there are those families grappling with care for serious illnesses in a poorly-funded public healthcare system.

To top it off, there are the traumatic experiences of gun battles between the drug gangs and the police, which affect everyone.

That many of the kids still come to school smiling and happy speaks of their resilience. And this happiness is not simply a façade.

Children live in the moment. They use their imaginations and creativity.

Kids also don’t know another reality; they make the best of what they have. They see other children smiling and their neuron mirrors respond, so they end up smiling too. 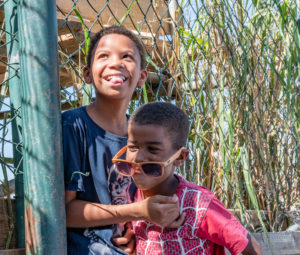 But their brains react in other less evident ways as well. Traumas begin to take hold, and their physical, social, emotional, and academic development suffers as a result.

At a physical level, the children may look healthy and well-fed. This appearance, however, conceals the reality of hidden hunger.

According to the World Health Organization, “hidden hunger occurs when the quality of food people eat does not meet their nutrient requirements, so the food is deficient in micronutrients such as the vitamins and minerals that they need for their growth and development.” The condition affects more than 2 billion people worldwide.

As the term “hidden hunger” suggests, it is not always possible to see the physical effects of this lack of vital nutrients. Even so, its “effects can be devastating, leading to mental impairment, poor health, low productivity, and even death.” 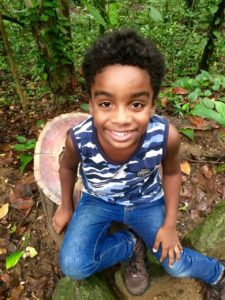 Let’s take a look at Andre from our After-School Program, for instance. Without a doubt, Andre is one of the most photogenic kids we work with. His beaming grin hardly speaks of undernourishment. In fact, dare we say it, he even looks a little chubby.

Yet this image is deceiving. He may not be suffering from absolute hunger, but he definitely is from hidden hunger.

Recently, his mother asked for a cesta básica because she hardly has any money. A cesta básica—literally, basic basket—is a collection of the products necessary for minimal monthly sustenance, such as rice, beans, coffee, flour, potatoes, bread, oil, some meat, bananas, and butter.

Even if Andre’s mother received this, there is still the problem that the cesta básica itself lacks the vitamins and minerals found in fruit (bananas aside), vegetables, and legumes necessary for development and health.

Given his mother’s economic difficulties, Andre has been eating a kind of crisps or chips for breakfast for the last few months. Yes, that may be enough calories for him not to look malnourished. But he has become much more irritable and lacking in concentration. His body is not getting anywhere near enough of the vitamins and minerals he needs for healthy development.

Andre is far from an isolated case. The children who attend Solar Meninos de Luz, EduMais’s partner organization, receive balanced meals at school, but even they can suffer from a lack of food at home. A combination of poverty and lack of nutritional awareness means even the food they receive is often empty, fried, and sugary. It fails to provide them with the micronutrients they require.

This lack of nourishment feeds into their classroom behaviour.

One student, Bruna, was often misbehaving. After many interventions, she had to be taken out of the classroom.

This is part of EduMais’s method. We take misbehaving students out of the class to talk to them and understand what is going on.

In Bruna’s case, she was in a state of fight. Blaming and shaming would only create more arousal in the brain. Instead, we try to find an opening with the students and empathise with their situation.

Among other problems, Bruna had been worrying about the lack of food at home. Even with the best of intentions, following classroom rules can be difficult when you don’t know where your next meal is going to come from.

At the same time, this doesn’t mean that bad behaviour can be completely excused. It is vital the children learn to take accountability for their actions.

After talking to Bruna, we agreed that she would make a video at home about the lesson’s topic. She researched ordinal numbers on Youtube and filmed herself reciting them.

Instead of traditional punishment, Bruna was able to continue her learning. She made up for the classroom time she missed while taking accountability for her behaviour. The video medium appealed to her, as it appeals to other students in similar positions. Her fight reflex became something more constructive.

The video she made also gave us a little window into her world. A dark, cramped world that left us marvelling at how she even studies at all. 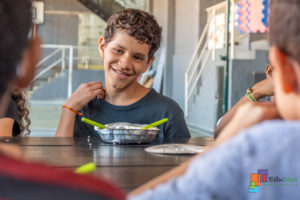 Many of our kids live in these circumstances. In many houses, it’s not possible to stand up straight, and there is no daylight as there are no windows. There is no separate living or bedroom; teenagers share beds with their parents. Others live in wooden shacks.

So while they may always look like they’re happy and having fun in our photos, which speaks of the positive impact of our programs, it cannot be forgotten that they live in very underprivileged circumstances. Even we aren’t always able to see what is behind their charming smiles.

But we do see them crying, misbehaving, even going out of their minds at times. For the same reasons we don’t share pictures of their living circumstances, we keep these moments private to not intrude upon their emotional space. Besides, we’d hardly be attending to their emotional needs in these moments if we were reaching for a camera!

Just because they’re always happy in their photos, then, doesn’t mean they don’t suffer.

But their resilience is astounding. They are our little warriors.

And we’re their warriors. EduMais is a place for them to be happy, to learn and develop, and to have fun, even if their home circumstances really are no fun at all. This, we believe, is reflected in our photos and videos.

But we ask you to remember the other reality that lurks silently in the background. Our kids go through hardship, each and every day. By supporting us, you help to develop them and their education, giving them a chance for a brighter future. And for that, we and they are extremely grateful. 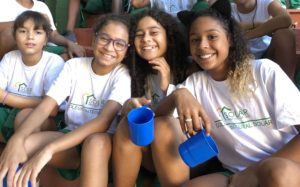