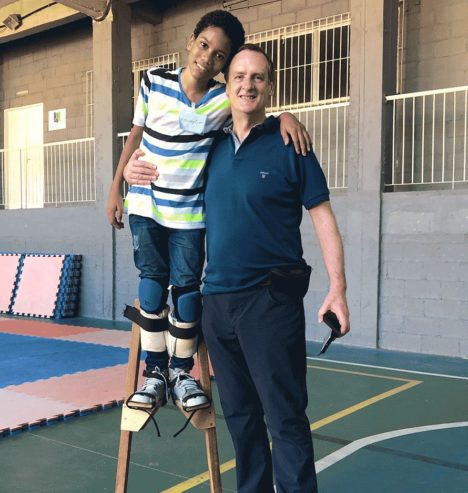 “He doesn’t know his birthday”, a classmate said to me in our classroom in the favela in Rio de Janeiro. I bent my knees, made myself smaller so I could look him in the eyes and asked, “have you never had a birthday cake?” “No”, he whispered. “Have you never had a birthday present”, I asked? “No”, he said softly. I asked him if he knew how old he is, to which he replied 13.

He doesn’t understand the carioca dialect (cariocas are the people from Rio and they talk with a lot of shhhhh sounds) as he comes from Pernambuco, a state in the Northeast of Brazil.

With both parents in jail (his father for 21 years), he lived in a very poor area with his grandmother. She didn’t know how to make ends meet so a friend offered her a place to stay in the favela we work in. Brendyelison thus came with his grandmother here to Rio de Janeiro.

His name is different. Our volunteers have difficulties with his name. He doesn’t see well. He can’t write proper Portuguese yet.

His classmates are not all showing compassion and empathy for him and his circumstances: they are quick to react when he doesn’t understand and some harsh words are hitting hard.

It takes its toll as he gets even shyer, even more reserved. I can see his brain being paralyzed by the pressure he is under. While his peers are having a good time making fun of him, he becomes smaller and smaller, shrinking before your eyes.

A new course was about to happen: learning to walk on stilts

What timing! For six Saturdays from 9:30 until midday, the kids were taught to take their first steps on stilts. This is not only fun but also builds confidence. Overcoming fear and obstacles and picking up the challenge can take those from insecurity to greater self-esteem in just 30 minutes. 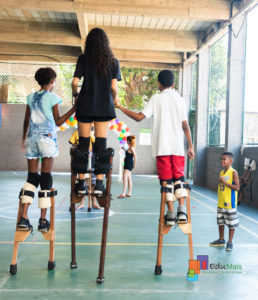 This course was only possible thanks to EduMais’s volunteers in Rio de Janeiro. Stilts were generously provided for class by the friends of Marcelo Sancho, an artist and a stilt walker.

In 2018, he got involved for the first time involved in EduMais Summer Camp. This was such a great experience for the kids that EduMais asked him back for the Summer Camp in 2019. Here, Diana (EduMais founder) saw the incredible impact of this stilt walking experience on the kids. An impact so great that Diana decided to create a separate stilt walking course.

So far, we have had 10 kids from the favelas we work in on the stilt walking course. All different ages, from the youngest of 6 to the oldest of 14.

In six weeks, they learned safety techniques, how to walk with the stilts, how to fall safely, and how to get back up again. The superstars learned how to conquer stairs with and even without hands.

Mastering how to dance on stilts

Brendyelison and some of his peers even went beyond stilt walking, mastering how to dance on stilts. They learned fun dance moves, footwork, spins, partner dances, lifts, choreography, and improvisation.

One of the volunteers created a special dance for Brendyelison. Over just six weeks, through focus and a desire to overcome, he became a master on the stilts. He fell many times, and every time he looked up with a smile and got back on the stilts. He never skipped a class and was always keen to come. All smiles, all the time. Our volunteers were always there to give the necessary support.

What impact did this 6-week course have on the development of our students?

Brendyelison learned how to connect with his peers in his class. He learned to be early so he had the first choice of the stilts. We even discovered he has a talent for the English language!

The feedback from Brendyelison’s grandmother puts it better than we can:

The change I saw in him was quite emotional for me as his grandmother. Every time he came back more confident. I was amazed at how confident and independent he’d become. He had no fear and took the whole event in his stride (even if it was on stilts) and loved every minute of it. He became a different boy in my eyes… thank you for bringing out the confidence that I knew was there all along.

With a traumatized brain unblocked, they learned to practice interpersonal skills through building resilience and trust. Such training is a fantastic opportunity for these kids and teenagers to engage with their peers and community in an exciting new way. 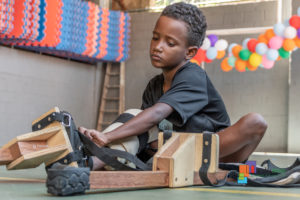 Learning to stand tall amongst their peers

But there is more. The field was covered with crash mats for judo which needed to be removed each time. We created a systematic method on how to organize it and this needed to be done in a certain order to make it effective and efficient.

The kids learned how to do this and could even do it at the end of the course independently. They learned to take care of the materials, to wait for their turns, and to help each other while waiting for their turn.

Every Saturday morning after the crash mats were organized, we sat in a circle and greeted each other. This was a great way to connect with them and connect them with each other. The morning was closed with another circle where they learned to say what they liked and what else they had learned that morning – in English, of course!

Become a volunteer in Rio de Janeiro and have a powerful impact on our kids and youth – apply now.