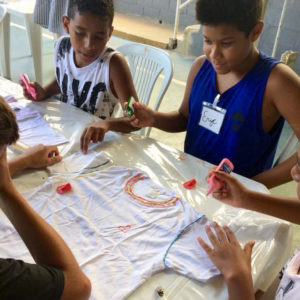 For three weeks, EduMais volunteers volunteered on the English language summer camp for over 20 children in January 2019. It was three weeks of fun, creativity and learning for both the kids and the volunteers. Our aim was not only to improve the children’s English but to aid them in their own self-development.

We also wanted to give the kids something worthwhile to do during the holidays. As most of their parents work, they don’t have many opportunities to leave the house. We wanted to provide them with something more interesting to do than sitting at home watching TV. We implemented the core values already in use throughout the EduMais programs to help the children change their attitudes towards learning, while also having lots of fun! It was also a great opportunity for the volunteers to bring love, attention, and joy to them.

A chance to volunteer

The summer camp was a chance for the kids and EduMais volunteers to spend a lot more time together. For three weeks, we saw them for four hours a day from Tuesday to Thursday. Having more time with the kids meant both their English and their behavior improved rapidly. Not to say the kids did not behave well from the start; most of them had been in EduMais programs for a couple of years now and behaved excellently. However, this summer camp was a chance to build on the positive behaviors the kids had already developed through EduMais. Also, it showed them how much they can do if they really put their mind to it.

Each day consisted of three different activities that would engage and challenge the children in different ways. The volunteers got together to talk the day through before the start of the day. But first, we would start the day with a ‘good morning routine’. This involved the children and volunteers sat in a circle, taking it in turns to say ‘good morning’ to each of their neighbors. Such a simple act had such a strong impact on the attitude of the kids. They would go from distant and distracted to alert and focused, while simultaneously forming bonds with their peers. What a perfect way to start the day! 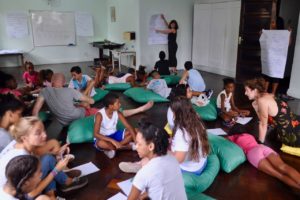 The first activity each day was a fun and engaging English class focused on learning through games and interaction. We played charades to help the children learn verbs. As volunteers, we encouraged them to engage in conversation by learning the ways in which to start a question. We also taught them how to express facts about themselves through the game ‘two truths and a lie’.

The English classes had an additional purpose: to teach the kids a song. They would then perform this song as part of their final presentation at the end of the summer camp. We chose a song from the film High School Musical called ‘We’re all in this together.’  Its message really resonated with what we were trying to achieve with this summer camp.

In order to make the lyric learning process more fun, we had a range of activities. These included filling in the missing word, which helped them learn key vocabulary. We also had competitions, such as which group could sing the loudest, to give the kids confidence speaking English.  As volunteers,we sang out loud with them. It was a moment of utter pride watching them belting out the song with such confidence and joy at the end of the summer camp. We were all so impressed with how far they had come! 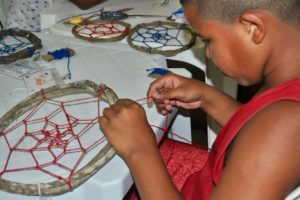 The second activity each day focused on doing something creative. It was important to give the kids the chance to express themselves in different ways. We gave them this opportunity through a range of creative tasks.

They got to design and decorate their own t-shirts and they drew everything from dragons to flowers to pizza! This was a great activity for the kids because they had full creative freedom to draw whatever they liked. They were only limited by having to work with someone else, which reinforced the overall message of the camp that ‘we are all in this together’.

Another activity that really challenged the children, but eventually led to them producing something amazing, was creating dreamcatchers. At first, a lot of the kids struggled with the intricate threading. With the help of the volunteers and after much persistence, often involving starting over and over again, they all finished with a unique and imaginative dreamcatcher.

The creativity and imagination that the kids showed during the creative classes really impressed us. But also, their perseverance and resourcefulness when something didn’t go to plan was remarkable. Seeing all the different things they had created displayed and worn for the final performance was incredible! They wore their t-shirts with pride, and they could not wait to take their dreamcatchers home to hopefully take pride of place in their bedrooms. 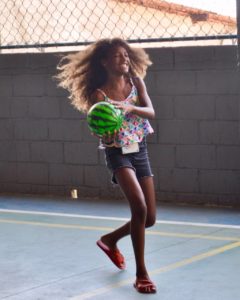 The final activity each day was some form of physical exercise. Of course, it is important to encourage children to engage in exercise and sport for their health. But it is also a great way for them to form relationships and to learn how to work in a team. We played a range of sports and games with the kids, their particular favorite being dodgeball. It was a game that every kid was excited to play, and its simplicity meant that no kid was left behind.

To encourage the children to speak English we banned them from using Portuguese. If they did, they would have to sit on the ground for five seconds, making them very easy targets. It was great to see most of them trying really hard not to speak Portuguese and asking volunteers how to say different words in English so that they could still communicate while playing.

The kids also got to try stilt-walking, which they all thoroughly enjoyed. It really created a sense of trust between the kids and the volunteers as many of them were initially reliant on us to make sure they didn’t fall. Watching their confidence grow as they went from not being able to move without holding onto our hands to walking completely by themselves was astounding. Their beaming faces when they managed to walk on their own really reinforced why the work of EduMais is so important. It’s unlikely an activity like this would ever be available to them without it. 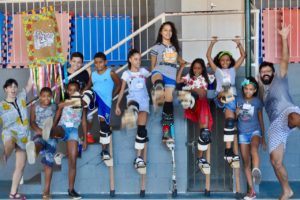 As part of the overall theme of the camp, we wanted the kids to learn a dance routine to the same song they were learning to sing in the English class. Thaís, an older EduMais student who took part in our exchange program last year, choreographed and taught the other kids the dance. This is another way we built on the theme of ‘we’re all in this together’. Thaís received an opportunity through EduMais and so we asked her to contribute to the program and give back to her community. She had the chance to develop her leadership skills and she did an amazing job. What a great example of the confidence and opportunities EduMais can give to the kids we work with!

The final performance made everyone proud, but especially volunteers

For the final performance, all of the children performed the dance in unison while some of the most talented stilt walkers cheered behind. Then some of the kids performed their own dances that they had only come up with that day and then it all finished with samba! On the day of the performance, we discovered that the boys had a real talent for playing the drums. They played their samba beats while all the other kids danced along. This final presentation celebrated everything the kids learned and achieved over the three weeks. 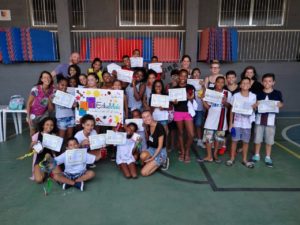