The Most Memorable Moments of EduMais Volunteers

By Jessica and Karin, with the help of Anna, Daan and Hannah

Anna, Daan, Hannah and Karin are special volunteers at EduMais. Their long-term involvement has allowed them to be present in so many moments of the children’s lives and to deeply connect with them. Not all of them are with EduMais anymore. Yet you cannot miss the glow in their eyes while taking a trip down memory lane and remembering their most memorable moments at EduMais.

Anna is from New Zealand and came to Rio de Janeiro for Carnival 2015, where she met her partner Daniel. She met Diana at a friend’s birthday. As she happened to be looking for volunteer opportunities at the time, she started getting involved at EduMais in 2016. Since then, she has been involved in the English courses and started / coordinated the entrepreneurship skills course. She is passionate about helping young people with education opportunities.

Anna’s Most Memorable Moments at EduMais

“I started the English and entrepreneurship course in 2018 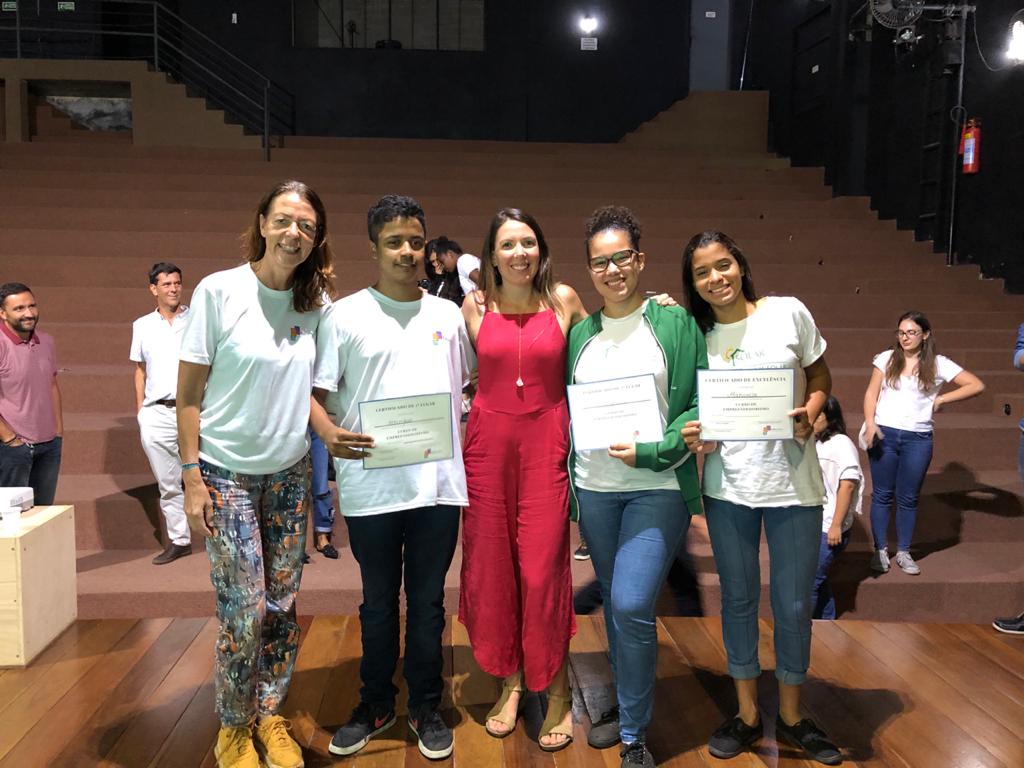 . In the beginning, I worked with Thais, the math teacher from Solar. While my Portuguese was a work in progress and Thais only knew a few words in English, we managed to run a course about entrepreneurial skills. I don’t really know how we did it, but the students loved it!

We ran the first few classes on marketing, got them to do activities on problem solving skills and setting up their own factories. We had some people join us during the year: Karin, Albert and Roberto. They each brought something different to the table, from Canvas Business Modeling to social media. We had amazing final presentations at the end of the course. Solar was very impressed watching the students talk about their projects about how to use canvas and how they applied the concepts they learned in the course.

For a teacher, feedback is very important in order to understand if we did a good job. Three months after the end of the course, the students reached out to us for refresher info from the classes. We found out that many of them were already utilizing entrepreneurs’ skills in their tertiary studies. We understood that they were directly using the tools and skills that they learned in the course.

This year things went differently. We had to redesign the course to an online format. I was really pleased with how many students could continue participating from Ensino Médio III. Though it seemed promising in the beginning, due to poor network connection or lack thereof, we lost a lot of connection with the students. Many of them couldn’t continue with their online classes. Personally, it was tough. But Diana and the team motivated me and we stepped up to continue the classes. We changed our strategy and tried to build up individual connection to each one of the kids. In times like these, many are helping out their families, so it is important to be empathetic and incentivize them. Amazingly, 11 of them completed the course, which is really incredible!”

Daan is from the Netherlands and lived in Rio de Janeiro for 18 months, between January 2018 to August 2019. He volunteered at EduMais for 15 months. Together with a team of dedicated volunteers, he delivered the English and the Extracurricular English Program. He also acted as strategic/marketing advisor regarding the continuity, growth and development of the organization. He also tried to help EduMais financially by running a half marathon with/for EduMais and fundraise money for the summer camp of 2018. And last but not least, together with Zac (Zachary Rowlinson), he designed and built the new website of EduMais.

Daan’s Most Memorable Moments at EduMais 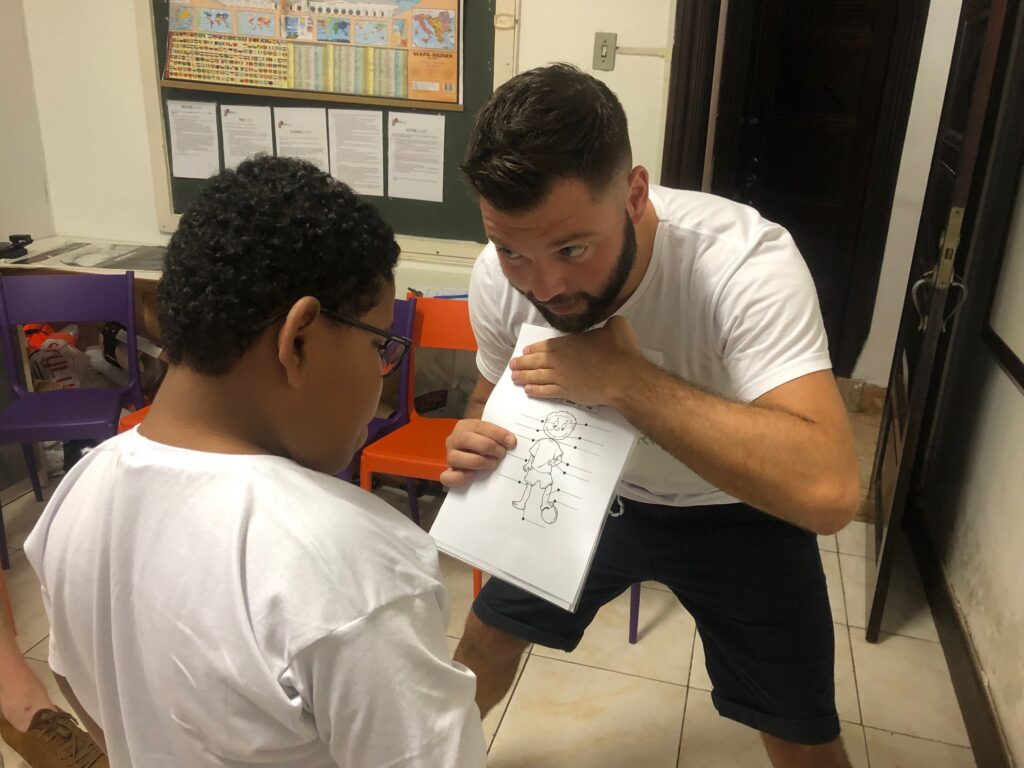 “I was walking my standard route to my Portuguese class and passed by some bakeries. There were always the same homeless people there asking for money and food. One day, I offered one of them a salgado. Instead of pointing at one salgado, he pointed at more, which I did not agree with. On that day, I was asked if the grounds for my action had been to do something good for someone who needed it, or if I wanted to feel better about myself for doing so. A friend of mine who knew Diana, suggested I get to know her and talk to her about it.

My involvement with EduMais began soon after meeting Diana. I suggested building out a website for EduMais. I wanted to give Diana space to focus on the programs while another volunteer and I focused on the commercial/marketing side. Furthermore, in addition to the website, though still today I insist that I did not suggest to start teaching, Diana insists that I asked, so I tried! I was shaking in front of my first class, Ensino Médio II.

In that moment, I was doing something that I only understood 15 months after. Though they are not typical most memorable moments, what stays are connections with a few special students, such like Wanderson, Rebecca, Henrique, Thais and Mariane. I have taught over 180 students and many of them have conquered a special place in my heart. If I could, I would mention all of them in this blog! A few kids are more difficult to reach. It is a challenge to understand how to create a connection with them. The students have so many different personalities and point of views about why they are in school and what they want to achieve. To be part of this that was amazing. I saw how one and a half years of teaching impacted the children’s lives. This is when I understood that I had created good in the world.

And looking back to my farewell drinks, I remember the small movie that Diana created for me. I was looking at it with tears in my eyes and I thought “I did that, without knowing I was doing it”. And that is something I had never experienced in my life.  It’s bizarre that one woman is spending her life task on that and it’s beautiful to see how many people join forces every year to support her on it. I miss it. If you have any doubts about volunteering, there’s only one way to find out: Just do it and go for it.! You’ll never regret it :)”

Hannah first got involved with EduMais in 2016, when she was working for the Rio Olympics. Through her job, she was able to provide tickets for select EduMais students to attend some Olympic games. After the games ended, she began volunteering regularly with EduMais in the after-school program. Hannah was the one to suggest that EduMais could also support these children in getting to know their city better with field trips to in Rio de Janeiro. She has taken the kids to Jardim Botânico, the Museu do Amanhã, Pão de Açúcar and many other cultural places in Rio.

Hanna’s Most Memorable Moments at EduMais 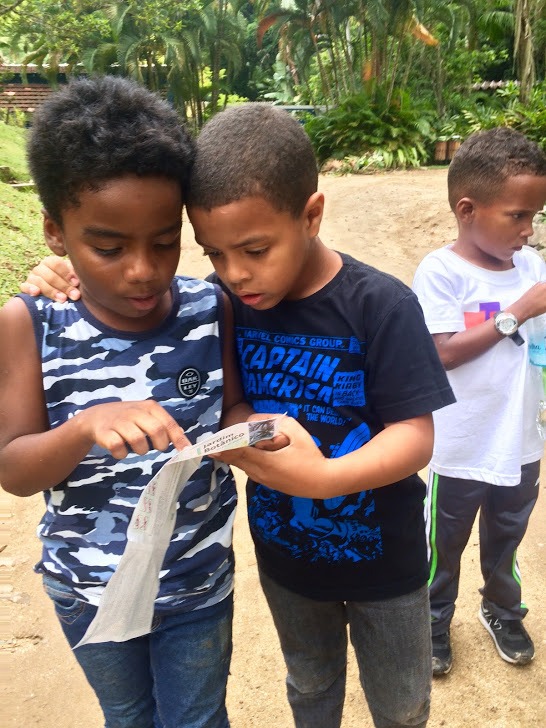 One day, we took them to Jardim Botânico. One of the student’s was borrowing my camera and making small films during the trip. When he saw the big, high trees in the garden near the pond he said, “I’ve never seen this in my life, these trees are so big!” He was experiencing pure excitement with things he hadn’t imagined existed.

The children in the after-school program are so sociable and it’s interesting to see them copy the social and interactive behavior of those around them. Whenever we took them out of the community, as soon as they were down on the street, they would say hello and try to chat up the workers and passerby’s in Ipanema and Copacabana who they knew from Pavão- Pavãozino and Cantagalo  It is funny to watch them interact with these people and talk to them as they are their peers.”

Karin is German and moved to Rio in June 2017 together with her husband and two sons due to her husband’s job at the Swiss International School in Barra. She learned about Edumais through a Facebook post in an Expat group. She was interested in the teaching method of Positive Discipline and contacted Diana to find out more about it. In total, she lived in Rio for 3 years  and volunteered at EduMais from October 2017 to May 2020. At EduMais, she was involved in Office Support, Classroom Management, English and Entrepreneurship classes.

Karin’s Most Memorable Moments at EduMais

“With the help of a generous donation from Cambridge MBA students we were able to offer an unforgettable Offsite Weekend to our 2019 Entrepreneurship class. For most of the kids it was their first time outside of Rio de Janeiro. After a two hour bus ride we arrived in Santana do Deserto, Minas Gerais. We stayed at a beautiful Eco Village owned by a partner NGO called Onda Solidaria (www.ondasolidaria.org).

The weekend was filled with many educational activities as well as free time for the kids to bond, feel independent and most of all safe! For us this feeling is so obvious and valuable when spending a weekend away from the city and enjoying nature. But nature, its silence, its sounds, its smells and the fact of not feeling threatened by traffickers, miscellaneous shootings and constant noise of a favela was something completely new to these students. Just thinking that they experienced this contrast for the first time at the average age of 18 makes me so sad! But with the help of these MBA students we all enjoyed a weekend none of us will ever forget!

The activities we ran included team-building through cooking together. The students were divided in four groups: starters, main course, desert, beverages. I received a shopping list beforehand and they organised EVERYTHING themselves! We talked about everyone’s PASSION and how important it is to include this passion in a future career. We also did some self-esteem tests and exercises, knowing that this is something most of those kids lack, due to where they come from.

Ricardo, the owner of the venue explained how the place is run in a sustainable way. In our free time we visited a waterfall, walked through town, had a campfire and grilled marshmallows at night. An early morning kickboxing class was another fun and powerful activity.

We left Rio as a group and really came back as friends and a team. I will NEVER forget the happiness and gratitude in these students´ eyes! Look at a few pictures to see for yourself what I mean. ☺ Volunteering at Edumais changed my life and was the most rewarding occupation I held so far …” – written by Karin

What impactful Most Memorable Moments! Do you want to create these memories for yourself and the kids at EduMais? Join our team in Rio de Janeiro and help make our kids’ dreams come true!! Contact us with your questions at info@edumais.org.